Many Passengers were Alive : Testimony of Mr. M

In this page, the testimony of Mr.M is presented. Mr.M is supposed to be one of the first ordinary citizens who reached the crash point of JAL123.  His testimony written below were given in the meeting organized by Miroku held at Tokyo, in June, 2009.

Please note that the testimony is edited and translated by Miroku for readers' convenience, with much care not to loose nor change the meanings of original remarks.

Miroku: Nice to meet you,Mr.M. Thank you for coming to this meeting. I heard you reached the crash site at that night (August 12-13th, 1985). Will you let us know why you made decision to go there ?

Mr.M [1]:My family home was located in the west area of the crash site, Nagano prefecture. In the year of 1985, I had just graduated from the university in spring and got job far away from the home town. At that night, I happened to be back home for enjoying Obon(*1) vacation.

I made decision to go there with two my high school friends with whom I had enjoyed bike touring untill then. We were so young, early 20s, that we purely or harmlessly wanted to appear on TV programs as the prized 1st citizens reaching the crash site.

I rode on my off-road bike, and each friends of mine rode on a off-road bike and a normal bike, then, we went for Minami-aiki village. I remember, before 9pm we entered into the forest road. My friend riding a normal bike, however, dropped off the tour, and the another friend and me, two of three, kept riding along the bumpy forest road.

*1: Obon - Days about Aug 12th through 16th are called "Obon" in Japan. It is believed that the spirits of ancestors come back home during Obon. Many people take summer vacation to go home and spend Obon  with families and spirits. Roads and public transportationｓ get dreadfully crowded  with people in the days before and after Obon everywhere in Japan. That's why JAL123 flied under almost full occupation, 524 passengers and crew members. 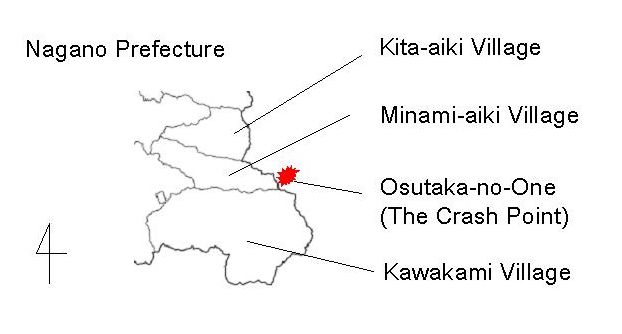 Even Mr. M could easily estimate the crash point near Minami-aiki village just by calling 2 local friends. Why not professionals?
Miroku: Oh, really? It sounds a little bit funny. Untill the time around 9pm on 12th night, the exact crash point had not been confirmed and not announced on broadcast (The confirmation was made after 5am on13th, according to the official report). How did you decide where you should go in the dark mountain forest without any signs?

Mr. M [2]: It was so easy. The sound of fighters, at least 2 military fighters circling above told us that the center of the circle must have been the crash point. So, we kept on riding into the mountain forest along the road as nearer the point as we could get, and walked ahead into the deep mountain beyond the end of the road.

Miroku: You mean, you knew where the crash point was when you got into the mountain ?

Mr.M [3]: Yes. I'm sure police also knew the crash point, since, a police bike chased after us while we were going to Minami-aiki village. But, we could easily leave the police bike behind. The police bike was too big and heavy that it looked so hard to climb up the steep hairpin curves of mountain roads.

After leaving our bikes at the end of the forest road, we walked into the mountain. To correct the path to the crash point, every time we got on the mountain top, we listened to the sound of helicopters and changed direction to where it came from. All over the night, helicopter sound came from the same point. That's why I believed the officials already had found the exact crash point.

Miroku: You mean you walked ahead into the deep mountain by your own feet, although it was dark at night. Didn't you think it was dangerous to do it ? (*2)

*2 Dangerous - According to the public statement, the crash site is located in the steep and deep mountains, and that is the reason why JSDF officials hesitated to send off rescue team soon after the crash in order to avoid additional dangers.

Mr.M [4]: Some friends of mine are sons of the owners of those mountains. I played with them in the mountains when I was a child. So, I know the area very well. It is the area where there're many rocks and pine trees. Of course, I know the mountains are precipitous and I thought it would be very hard to climb up.

In any event, we thought just about going forward to the crash point then, we kept on climbing up the steep ground, sometimes got over overhangs of rocks, regardless of mountain path, we  forcibly made way with passing over several mountain tops. So, it took 6 or 7 hours to get there. It was probably around 4 o'clock in the morning when we got there.

Miroku: How did you recognize that it was 4 o'clock in the morning?

Mr.M [5]: I didn't wear a wrist watch then, but the sky over the mountains were getting slightly bright. That's why I thought it was around 4 o'clock(*3).

*3 Slightly bright -  In summer, dawn at mountain top starts earlier than flatland. Mr. M knows much about meteorological phenomenon in mountains from his living experience in the area.

Miroku: What did you see there ?

Mr.M [6]: I saw 70 to 80, no, about 100 JSDF soldiers were there. I realized then we were not the first witnesses. At the same moment, I also heard clearly moans of victims were echoing in the valley.

Miroku: What? Any persons alive were there, making moans? Do you remember how many people were alive then ?

Mr.M [7]: I didn't count them all, but I guess 40 to 50 persons at least were alive by considering the echo of their voices. With my own eyes, I saw several people moaning with pain. As I said, you know, there were many JSDF soldiers around us, then, I judged I should tell them where wounded persons were and asked them to aid the wounded as soon as possible. So, I started looking for wounded person around where I could hear voice of moaning, and then asked soldiers to help him or her immediately.

But, I felt distrust in their response. They said just "It's dangerous to move wounded person. Wait for a rescue team coming later" and did nothing to do with. They just kept on picking up something silently from the ground to a round bag, sized 40 to 50 centimeters (16 to 20 inches) diameter.

Miroku: What were JSDF soldiers picking up ?

Mr. M [8]: It was dark around, I couldn't see what it was. I guessed they were picking up something important such like a voice recorder. The equipments of the soldiers, I remember, were a bare large army knife in one hand and a night vision on head in addition to the large bag. I also remember they were wearing short toe mountain boots, then I thought they'd checked it out well about the area where the ground is so steep. 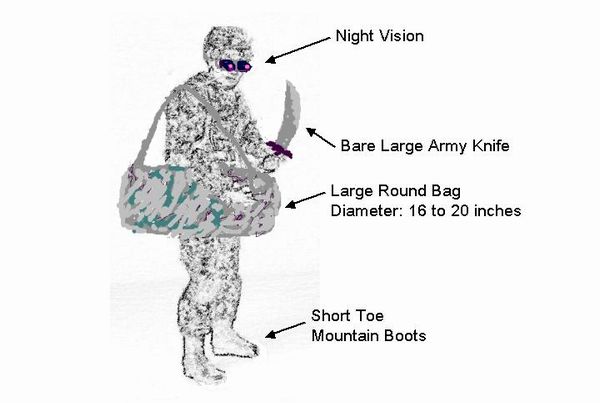 An image of JSDF soldier Mr. M saw at the crash point. They were picking up something from the ground without caring about wounded persons
Miroku: How long did you stay there ?

Mr. M [9]: After about 1 hour had passed, one after another new units of JSDF arrived there, and the first unit with night visions we saw started pulling out. We also started going down a mountain, since I supposed rescue operation got moving forward on a full scale. But I just worried about the new units, they wore normal military boots and they looked so hard for climbing up and down on the steep slope.